In the full glow of a morning sun, seated against a white marble keystone (indicating the ‘Keystone State’), is a female figure representing the Commonwealth, raising the veil of night, the morning star in her hair, in her right hand the fasces; behind her, the Wyoming Valley and the Susquehanna River.

At her feet are two figures, representing the two principle industries for which the State is noted - a coal miner and an iron worker. On either side are a group of notable Pennsylvanians, representing Law, Science, the Arts, Finance, and the Church.

On the left are Benjamin West, General Dickinson, George Clymer, and James Wilson - the able lawyer who was counsel for Pennsylvania in the Connecticut claims at Trenton, and one of the framers of the Constitution. 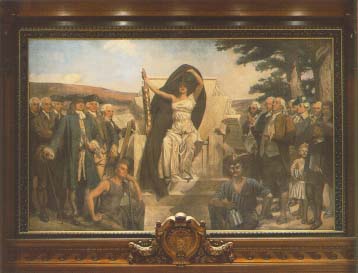 On the right, Thomas McKean, twice Governor of the State and afterward Chief Justice; Bishop White; Benjamin Franklin; Charles Thompson; ‘Mad’ Anthony Wayne; Robert Morris, who financed the Revolution, and Robert Fulton, painter, and inventor of the steamboat, and a one-time pupil of Benjamin West.

Below them, figures of a boy and a girl with school books, representing coming generations, looking up to one of the most picturesque and interesting figures in our history - Benjamin Franklin - in the act of experimenting with electricity.

Written by Walter Wakeman. Summary of Expenditures of the New Court House at Wilkes-Barre, 1905 to 1911. Universal Audit Company, New York, 1912.