The law, symbolized by a seated female figure, wearing a cloak of scarlet and a gold brocade, has set up her judgment seat in the Coal Regions and is deciding between the good and the bad. She plants her sword in the face of evil-doers (represented by a group of people at her right hand, in the background) and clasps hands with the honest. The figure of the woman who has thrown herself across the knees of the ‘Law’ is intended to suggest the person who is upon the wrong side, rather through weakness than ill-will. Mercy holds her hand protectively above this latter figure and justice raises the scales. Figures of two lawyers, a working man, women and children fill up the rest of the composition. The background is closed by a large American Flag.

Written by Walter Wakeman. Summary of Expenditures of the New Court House at Wilkes-Barre, 1905 to 1911. Universal Audit Company, New York, 1912. 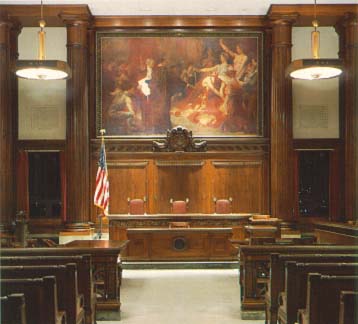